As previously discussed, I got lucky on a 1963 produced Model 12 last year. Good lucking gun. And as well all know, in 1964 Winchester decided to ruin their brand cut costs on most of their flagship guns.

The '94, the Model 12, and the Model 70 were all redesigned to be more cost effective. Some engineer at Winchester at least made a small principled stand and the cheapened Model 12 was renamed  the Model 1200.

The new Model 1200 was actually kinda cool. It had a rotary locking bolt which it would share with the future 1400 semi auto. The 1400 being a very decent semi auto that was like half the cost of the competing 1100. I traded a friend a really nice Drake hunting jacket for one. But that's a tale for another day.

So, any who, the 1200 was released on the American market and actually met some decent success. They're nice old guns for what they are. The Army bought a bunch of the defender versions for use as riot guns and what not.  Being produced from 1965 until 2006 when the Connecticut plant was shuttered, it stands to reason that more than a few would end up in pawn shops across the country. 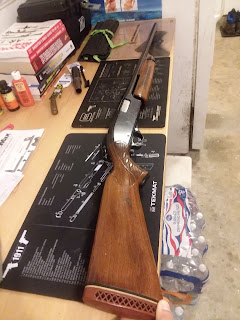 And of course, if it ends up in a pawn shop, I may be interested in it. So, actually funny story here, I didn't buy this one. My long suffering wife did as a last minute fill in Christmas present. That poor shotgun set on the rack for about two years, not drawing any interest. It's a bit of an anachronism in the modern shotgun era. Wood furniture, a 2 3/4" chamber, and a fixed modified barrel. We didn't give the fella who sold it to us a lot of money, nor did Jackie spend a lot on it. But I'll be damned if the thing doesn't shoulder better than my Model 12 does. Probably that extra half inch of recoil pad. Also, the 1200 was one of the first guns in later years to come with a WinChoke compatible barrel. Which is on my to do list down the road.

Its in fair to good condition, showing some signs of being roughly stowed after a hunting trip. But the wood looks good. And it's a nice piece of American firearms history. 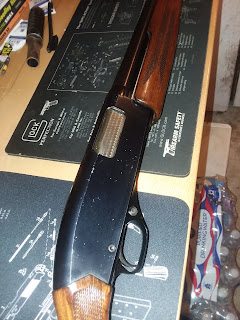 Winchester made these until 2006 when they were bought out by FN and the Winchester plant closed. The Winchester brand, as wholly owned by FN, began importing a cheap Turkish made pump as the SXP. And it's garbage. Kind of like the Model 120 Ranger which was an even cheaper version of the 1200 that you could buy at K Mart, Roses, and Wal Mart back in the day. I roll my eyes anytime some one mentions their Winchester pump and then utters "SXP" or "120" as a model. Grrr. But I'm a gun snob.
at February 06, 2019