So, Pudge is continuing to make me look competent this week. Below you'll find his write up concerning his home built Not A Glock. What makes it funny is Pudge is a bit of a Troglodyte who thinks the Browning Hi Power is still a modern service pistol.


NAG-19
I’m sure some of you reading this are like me and very much dislike Glocks. I am also sure there are an equal number who say that Gaston created perfection. And if by perfection you mean the need to buy the gun, stipple the grip, undercut it and reduce it to get a better angle similar to some guy I know who made a gun that won two world wars, then yes, Gaston nailed it. Now that my rant is over I will be the first person to recommend one of these tupperware pieces to friends of mine getting into the firearms realm as a good, first handgun. I understand the merits of such a piece and since I carry one for Uncle Sam I made sure I can shoot one with quite vigor.

I cut my teeth on a 1911 so I am very biased on triggers and the way a gun should feel in the hand. (I may have mentioned this a few times when I talked about the Hudson H9) But if you are new to firearms why not start with a piece that is easy to learn and let’s be honest, can be neglected more than others. But since this was for me and not for someone else I decided the best way to get into the plastic fantastic game was to make my very own NAG-19 (Not A Glock-19). I started with a compact size polymer 80 lower (known as the PF940C) and proceeded to build the best piece of plastic perfection I could. 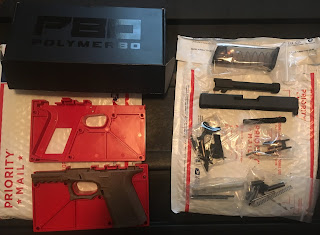 As I mentioned I’m not a big fan of polymer frames but I can deal with this one. It comes double undercut from the factory, they threw on a beavertail for men with real hands like myself, straightened the grip and removed that nasty bump on the back and the terribly placed finger grooves on the front and changed out the Glock rail for a standard picatinny offering. After throwing some other aftermarket parts on it to make sure I didn’t use a single factory part from Glock I’d say that I created something a little closer to what a G19 should be in my opinion. 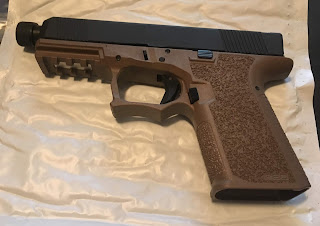 You may ask, if I’m not a fan of tupperware then why did I make one? A few reasons, but mostly because I can. I am a very curious person who loves guns so I like to put my own stuff together whenever I can. I have played armorer myself a few times on the Team because sometimes you don’t always have support where you are and it’s nice to know you can fix your own stuff. I wanted to build something that if needed could utilize all of the common parts and pieces that may be found laying around when SHTF if that is a thing. Lastly, I want to say that if you are patient and find the right deals you can make quite the blaster for less than you can buy perfection that needs to have more cheddar spent to modify it. So if you like tinkering and have an exacto knife and a Dremel and want to flex your rights then go forth and build your own NAG.

Editor note: Moving forward, we will probably be looking a bit more closely at turning a P80 chunk of plastic into a NAG. Because we can and I like to think that it pushes *insert gun grabber here* a little further towards a coronary each time a "ghost gun" is knocked out on a drill press.

Today, we're gonna get a little technical. Pudge supplied the below write up concerning the bat belt. Oops, I meant to say battle belt. A belt that one hangs their gear on like Batman. But cool Christian Bale batman.

Battle Belts- So Tacticool
Do I need a battle belt? Maybe. There are many reasons to run a battle/war/shtf/go belt. I’ve been in the Infantry and SF for 8 years now and until my most recent deployment I haven’t worn a special battle belt minus a handful of operations where I needed to carrier some extra surprises. On this last trip I found a great setup for me and just recently decided that I wanted to put one together for the house as a grab and go item fully loaded ready to go if needed.

As you can see, I have a little bit different setup between each belt because they are set up for different jobs. However, you can also see the similarities between the two. Let’s start with my work belt. On it I have a grenade pouch for my compass, a spare m4 mag pouch, a roll-up dump pouch, a tourniquet, an extra accessory pouch, a holster for my primary weapon…a radio antenna, another grenade pouch, and a cow tail to make sure I don’t fall out of air thingies while yanking and banking. So why did I choose each of these? The first grenade pouch is for my army issue compass. I am a freak and unlike most Soldiers my age I still love a good compass. I carry a standard issue one on my belt, I wear a wrist compass that has been my primary since Ranger School, I wear a Garmin 401, and have a program on my sweet pocket computer to make sure I don’t get lost. But no matter what, that compass on my belt has never failed to point me in the right direction. I only carry one spare m4 magazine on my belt in case I need a oh crap reload. The rest go on my body armor and back pack. I carry the dump pouch to make sure I have a place for all my candy bars or if I need to throw something quick in there to be better placed later. The tourniquet is to make sure I keep as much blood in me or one of my buddies as I can. Notice the placement on unused space and can easily be reach from pretty much any position with either hand and is secured by rubber bands so that I can rip it off quickly if needed. The accessory pouch holds a notepad, sharpie, and sat phone. The antenna holster was custom made as an easy way to keep my sat antenna ready to go. And lastly the other grenade pouch has a spare radio battery in case I need to do a speed reload on my radio. Yes, I realize it is upside down as well. I do this because sometimes I carry a frag grenade in there depending on the mission and if you’ve ever tried to get a grenade out in a hurry it doesn’t work well. I flipped the pouch so all I have to do is unbuckle and it slides right into my hand. I do the same with one on my body armor. I chose each of these things based on what was necessary for missions as well as if all I had was my belt I could still get by.
Now my personal belt is a little different because I’m running alone or with Red if I need to grab it. I don’t have the ability to call in air support so I tailored it for a grab and go belt that has everything needed in case that bump in the night turns into multiple explosions. On this belt I chose to have a double pistol mag pouch, single m4 mag pouch, roll-up dump pouch, tourniquet, knife, and pistol holster. The double pistol mag pouch is because I keep the handgun in the holster so I know worst case I have a minimum of 45 rounds on tap. A single m4 mag pouch because that will be the next gun I grab if time permits and like to have a reload ready just in case. Like my work belt I like to have a place for all my twinkies so the dump pouch is on there. Any time I might get holes poked in me or someone else I like to have a tourniquet. The knife is on there if things get really dicey (pun intended). I moved the knife that would normally be on my body armor at work onto this belt since it is made to stand alone or with more gear if the situation dictates. And then my handgun holster with handgun so no matter what I have something to fight with.
The similarities you’ll notice are that both belts are 1.5 inches in width, fairly thin but stiff enough to hold up what I’m loading them down with, Velcro to go over an inner belt or if needed just throw around my waist and go, have cobra buckles (I like the adjustment and quick, but secure on and off of these buckles) and a way to thread molle or other clips through so that everything stays put as I do a poor impersonation of John Wick.
Now these are just two meager examples of what you might have seen and/or want to put on one but that doesn’t mean they are right choices for you. Don’t go watch the newest Navy SEAL video about battle belts and decide you need 87 magazines and a beer holder when in reality a handgun and couple spare mags might suffice. And it doesn’t have to be the newest, fanciest gear. Use what you have and find out what works. If it is 30 years old and still works then it works. Just remember that if you are going to make one of these bat belts, then tailor it to your needs. I definitely see the utility of one in certain situations but you will almost never see me wearing one outside of work because there is something to be said about running low profile. With that said, I have one at home ready to go just in case Red Dawn (the one with the Swayze, obviously) becomes reality.

Oh hey guys. Sorry for the radio silence. I won't bore you with excuses. Life got in the way of writing.

I turned 31 and feel every day of it. Helping out down at Scout camp a couple of days a week has been kicking my ass. And I taught the Golf Merit Badge. And Jesus walking 18 is a effing hike.

And my Mother had her knee replaced.

And a beloved Uncle, who all of my virtual friends would certainly love, has been having some health problems that the Medics just can't lick.

And that really and truly blows. Cart could bust a bronc, birth a calf, slaughter VC with an M-60 and then an M-79, wire a house, hook up a goose neck on the first try, and was the best horseman this side of General Patton. Oof. Yeah, this one is smarting a bit.

That being said, Jackie is dragging my sorry carcass to Greenville for a couple of day. My fraternity big brother and his lovely wife live there. And they have a minor league team. And breweries. And historical markers. Gonna work on my head space and timing.

That being said, look forward to some articles from Pudge this week. Nice to have friends to pick up your slack.

Next week I'm gonna get falling down drunk for the 4th and hopefully do some writing again.

Thank y'all for stopping buy.