Cletus, listen, the Model 70 didn't originally come with sights. You ain't going to Africa any time soon. You don't need iron sights on that .270 you are going to put a cheap Wal Mart scope on. Please don't act like "real rifles come with irons." They haven't in the last 50 years in calibers other than .30 WCF, . 35 Rem, or .358 Winchester.

You're not a native hunting guide in Alaska.

So, Cletus, for the love of Eugene Stoner, don't bitch to me, especially when I have people stacked up at the counter, the phone ringing, the pizza guy waiting, and the FedEx guy needing me about why the Bushmaster bargain basement beginner blaster I just handed you doesn't have iron sights.

The 1968 Gun Control Act prohibits an unlicensed person from making a firearm to sell. However, that being said, you can churn out as many home built guns as you like so long as they comply with federal and local laws. That is to say I can't make a Sten gun in my garage because it would a be an unregistered, post '86 machine gun. May Charlie Rangle burn in hell with Stalin, Hitler, and Sherman.

But, all that being said, I can still make anything else I see fit.

So, what does an intrepid gun right's activist do?

MidwayUSA was blowing out Polymer80 Gen 3 Not A Glock lowers. It was an impluse buy. But if you give an aspiring machinist a drill press, he's gonna buy an 80% lower.

I'm under no illusions that the Feds, if they wanted to could run my card purchase to my PO Box and then to me. But I doubt it ever comes to that.

However, some dumbass congress critter, but I repeat myself, has decided home gunsmithing is bad and scary. And therefor must be banned. Because all those kids offing one another in Chicago have basement arsenals like the Israelis in the War of Independence. Yeppers. That's that ticket.

Oh hell no it ain't. The reason you get guns in Chicago and the like is two fold:
A) Guns don't wear out. So even that Hi Point C9 is gonna get passed around for years.
B) The Feds rarely prosecute straw purchasers. Rarely.

But, HR 7115 goes after the guys like me who like to do things in our garage. The fella who only has one lower but a couple of different uppers in multiple calibers. The bench rest shooter that free floats and changes barrels because he's shooting something like 300 H&H.

Else where in the gun blogospehere I read, and can't remember where, that this bill is an attack on dedicated gun owner. And if we can be silenced, the fella who keeps a Shield in his sock drawer is next.

That is very much the case. However, if it becomes illegal to make your own firearms, what's to stop me from saying screw my Not a Glock and building a Sten clone? The parts for that are cheaper at Lowes. Or even cheaper at the local hardware store where they don't have a UPC scanner and prefer cash.

I hope everyone is enjoying Thanksgiving. And has someone or something to be thankful for. I'm hoping for a Falcons win and for NICS to cooperate tomorrow. But that's a future Mack worry.

Today I'm thankful for the following

Okay, I'm off to the Father in Law's house. Gonna show him the pistol build and talk smack about his Steelers.

Weapons Wednesday - Feeding from the bottom


Before we get too deep into today's post on fine sporting shotguns, I have made words elsewhere on the interwebs. Click here to see what your favorite Counter Jockey carries in his pockets everyday.

For whatever reason, I am right handed and left eye dominant. My vision is pretty crappy but when I close my right eye I see decently through my left eye.

So, through out my shooting life, there has been a mess of contradictions. I shoot bolt guns awkwardly unless I'm on a bench. If I'm shooting a full sized hand gun I embrace my inner Larry Vickers and just turn my head.

However, there is one platform that I some how always shoot well and can reload without looking like a monkey trying to have intercourse with a football as I do it.

That gun is the Ithace 37, in all of it's various iterations.

As always, the Ithaca 37 was a gun designed to get around or outlast various John Browning patents.  Seriously, to steal paraphrase Tam, when the U.S. Space Force invades Jupiter for ice, the hover tanks will have M-2 machine guns on the commander hatch.

That being said, Ithaca wanted to produce a pump gun on par with the Model 12. And had to wait until 1937 to do it. Which to paraphrase the President, was the worst time ever, in the history of ever, to introduce a sporting shotgun. 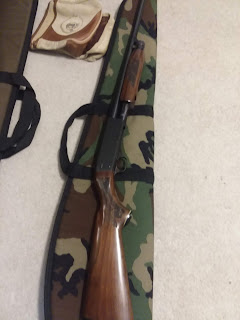 Mine has taken many a dove and a couple of ducks. In college, I decided that I would embrace my inner Whiz Kid and only keep one shotgun to do everything. It worked okay for home defense (never needed it), okay for informal skeet shooting, and bagged me one solitary mallard one early morning when I should have been at PT before class.

The Model 37 is definitely a gun from another country, to borrow a term from Colonel Cooper. Machined and well engraved with nice wood.


Ithaca produced 1911s and Grease Guns during the war. In a a weird twist of fate, during my Father's service in Southeast Asia, he carried a cut down Ithaca 37 DS Police riot gun and an M-3 grease gun. Compact, handy weapons easy to sling to your person in the confines of either an HH-3 or HH-53.

My Old Man was a couple of different Ithaca bird guns, even to include one my Mother shoots rarely. Which, to me, epitomizes the appeal of the Model 37. Fine bird guns, duck guns, riot guns for the police, trench guns for the military, and home defense versions of the Model 37 have all been produced. My favorite episode of "Dragnet" involves Sgt. Friday checking out a 37 DS Police from the armory, loading four shells, loading one into the chamber, topping off the tube, and dropping an extra shell in the pocket of his sport coat. Be Prepared.

Hell, CPL Hicks even uses one to kill a Xenomorph. Juan Rico has one mounted under his Morita carbine.

Pop bought me the above pictured Featherweight for Christmas one year shortly prior to Commissioning. I shoot it okay. The stock is a little short and the barrel is kinda short for my preference. 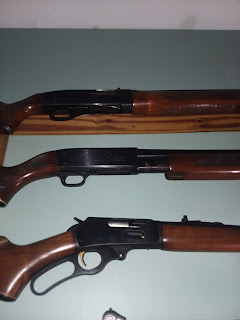 But it looks good on the rack, and every so and Old Timer will come into the store and ask about "old 37s" and I can square my shoulders and say "Yeah, my Old Man bought me one. It's a great gun. Especially if you shoot left handed."
at November 21, 2018 No comments:

Sunday morning, I ventured over to the local indoor range. And, well, flung some lead down range.


Namely, the Uzi Eagle. As imported by Uzi America. And assembled by IMI. When this gun came in the shop, I knew I had to have it. I bought it right before Jackie and I got married. So it set unattended for the next two months. Finally shot it a little bit when we went and saw Pudge and his Lady over the 4th. And it was less than impressive with 185 grn Winchester White Box FMJ. 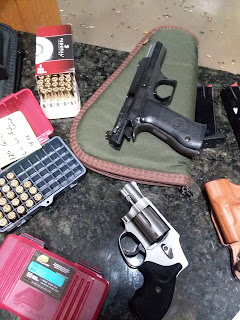 I ran 100 rounds through it. Zero malfunctions and decent groupings at seven, ten, and 12 yards. Which look like damn Camp Perry winning groups compared to how the gun use to shoot. 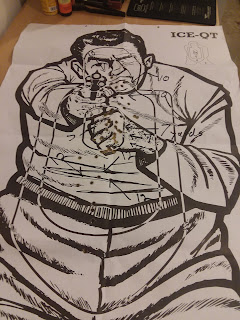 Excuse the terrible picture, but I'm mighty impressed with what the cheap import can do. An all steel, heavy TDA gun shooting .40 S&W is like the opposite of cutting edge these days, but man, it's fun when it does the work for you.

Oh, and because, it ain't any fun having a SiG and not shooting it where people can see you, I ran a box through my -226 as well. 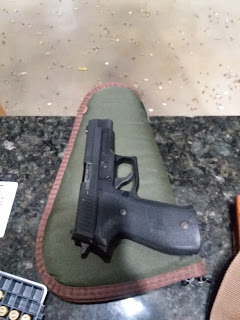 So yesterday, I went to the PO Box and picked up a package. 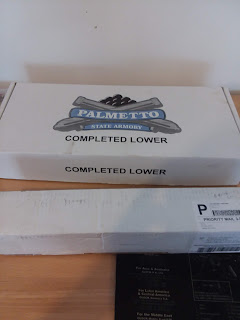 And proceeded to get my gunsmith lego builder on. AR platform weapons are like erector sets for grown men with too much disposable income.


I finally got done with the pistol build I satarted back in late summer. The lower was a blem PSA complete with a KAK blade. The upper is a Karri's Guns 7.5 Hellhound .300 Blk with M-LOK furniture. Karri's is right on the edge of budget/mid tier, but for a range toy I'm not too worried.

And speaking of range toys, the above pistol was entirely too much fun to shoot. Ran a whopping 80 rounds through it, doing a bit of load development. A lot of fun.

Colonel Cooper wrote of the "Thumper" concept in his Gunsite Gossip columns. And was friends with JD Jones, original innovator of what became the .300 AAC Blackout. That being said, I doubt he would approve of my hand little PDW. 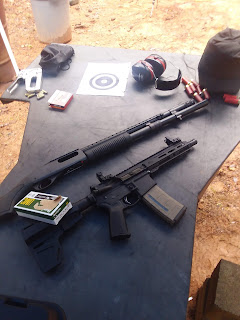 Kinda funny next to a Remington 870 with an extended tube for Heavy Metal 3 Gun. And my favorite part of this whole build is that is a direct result of the asinine '34 NFA.
at November 14, 2018 6 comments:

100 years ago, the guns fell silent. General Pershing said we should have occupied Germany proper. But then what would a Soldier know about how to win a war. 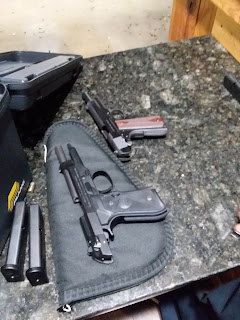 I like fighting pistols. I carried a Beretta, though as a squad and platoon leader, my weapon was a radio. As a Company Commander, my weapon was enabling the domination of  the battle space by the battalion commander by keeping the HHC functioning. Yeah, that sucked.

A friend of mine is down range with a Glock 19 on his side. In a couple of months, some kids from Boy Scout camp who worked for me, truly some of the nation's best, will be down range with M-4 carbines and war weary M-16A2s and -240s in pintle mounts.

It was my honor and privilege to saddle up to the faint rattle of musketry over the far hill.

A lot of my friends did, too. A lot of the people on the sidebar did as, well. My Old Man, next door neighbor, Father in Law, Brother in Law, Mother in Law, favorite Uncle, and Grand Daddy did too.

Today I'm gonna go bust clays with Dennis. And maybe come back and drink a beer and watch war movies on TV. 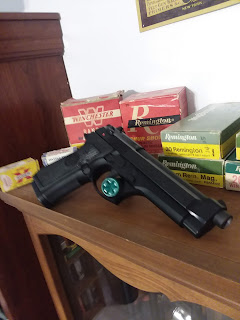