Oh, yes I had a posting schedule. Sorry about that. Still short handed at work. And for Mother's Day the old man requested my assistance in a small house hold task. What was that? Oh, yes. Ripping up the entire bathroom floor and replacing it for Mother. My back is still killing me.

Tinkering Tuesday will be Tinkering Thursday this week. And Free Form Friday will be long rambling view on what G.I. Joe should carry in his fight against Cobra, err, Haji, uh, bad guys.

A couple of weeks ago at work, a gentleman brought in a soft sided rifle case asking if we traded.

"Sure" I responded with more enthusiasm than felt, for generally a trade is something to make me despair. But this turned out okay. The nice guy pulls out a Remington 721. Oh boy. 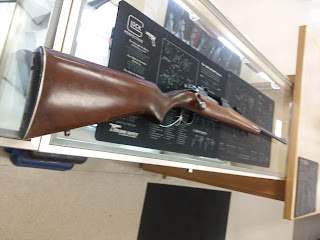 The 721 was also a fairly low cost rifle, sort of a fore runner to the Ruger American and Savage Axis. But a very well crafted one. Some of the elements of the 721 carried over to the 700, Remington's flagship rifle.

Plain stock, iron sights, shooting the Lord's Own caliber, .30-06 Gov't, I'm sure this rifle provided deer to some serviceman home from WWII. And then passed hands a couple of times. And wound up in my shop as a trade for a GP-100.

It will look good on the wall. And maybe take a white tail this fall.