It was the Friday after Thanksgiving. It was cold, but not terribly so. Much colder and we wouldn't have been hunting. Kayla was bundled up in my old M-65 field jacket, still proclaiming me to be a Cadet Major of the Eagle Battalion. The sun slowly crested and shown into the river valley. Legal shooting light. A few desultory Coots flew by. Far up river, a goose honked. I didn't have any goose calls. Not that they would have done much good. A pair of wood ducks crossed our line of sight. We each fired twice, one duck falling. I wound up cleaning it, but that was her duck. Her first one. And she bagged it with a hand me down Remington 1100. An old one, 2 3/4 only, modified choke sporting walnut furniture. 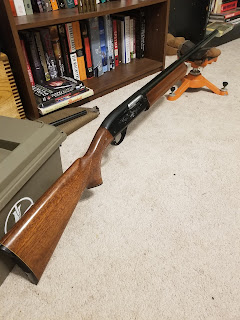 The Remington 1100 was the first commercially successful gas operated shotgun that was actually profitable to produce. Introduced in 1963, it is still produced today. My 1100 was produced somewhere in the mid 1970s. Big Green's dating service accuracy has always been a bit questionable. Seriously, they would probably match me with Amy Schumer. 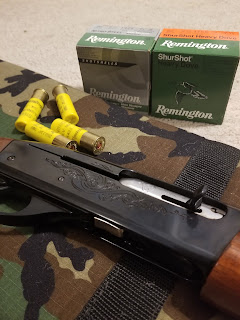 Pops bought this gun in 2000 from the local barber. I can't remember for the life of me what he paid me for it. I wound up with it as a Christmas present sometime in the late '00s. If I recall correctly, I wanted it for a then girlfriend to shoot, but, since Jackie reads this thing; the less said about that the better.
I don't shoot it much these days. The lack of changeable chokes rules it out for hunting. And I am not a barbarian so therefor I won't shoot it at sporting clays, trap, or skeet. Those are games for finely engraved double barrel guns, you see. Yes, I have a tweed jacket. No it does not have patches. But if you find one of those, let me know. 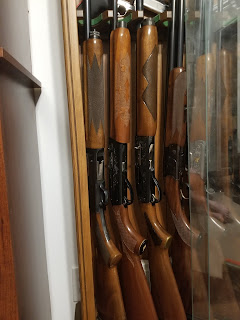 However, that old 1100 is still one of my favorite guns. Kayla has since left for college and doesn't hunt much anymore, her new interests centering around boys and golf. But the gun looks good in the cabinet, resting peaceably next to the Sportsman 58 and a Belgium Browning A-5, a story for another time.