Sorry for the week long hiatus. There was beer to drink. Waves and rays to catch. Old airplanes to look at. Pulled pork to eat. Work emails to ignore. Blogging not to do. Oh, yeah, oops.

So, this past week, as the astute among you have gathered, I was on vacation. But it was most definitely a working vacation. Did some shooting for the P-95 project. Did some shooting of the featured weapons for tomorrow. And finally got to play with my odd ball project.

The .300 Blk, or .300 Whisper, or .300 JDJ and what have you, one of the new hot cartridges right now. Especially out of an AR- pistol with a shoulder brace. Because screw you Justice Miller.

The round has some pretty awesome potential. Runs great suppressed. Is murder on soft skinned animals and is murder on soft armor. And of course, I'd have to have it. And of course I can't do anything normal. So I get a bolt gun for a round designed to give some thump to the AR- platform.


While on vacation, we stayed with a set of our couple friends. Pudge being a girl scout hat wearing snake eating fellow who works on an air base for some reason. But he appreciates fine firearms, too. And we'll touch on that some more tomorrow.

But as for shooting, I couldn't believe how quite the thing was. Ear safe, even. Jackie is now a bit miffed at my friend because this was all the cause I needed to make the jump into tax stamp land.

I had the hardest damn time trying to get on paper with the thing. I blame the shooter and a half ass mounting job done by me in a hurry, but, the rifle functioned flawlessy. And no issues cycling. Which is why I really went with a bolt gun in .300 BLK. No worries about running a gas system. Any washed up counter monkey can run a bolt. 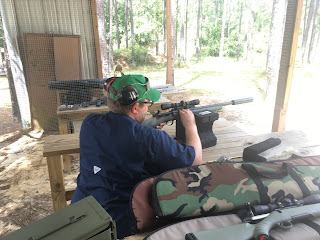 Also worth note is that shooting a .30 caliber bolt gun after a day in the sun is a bit painful until you put a can on it.

I can't wait to ring out the rifle some more. Oh, and get an actual zero. 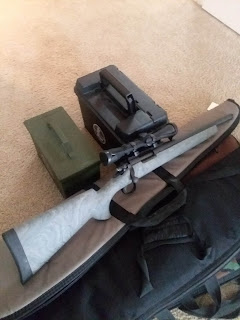