Training Under Quarantine-
By Pudge


During the quarantine I figured I might as well be a little constructive with my time. So, I set about figuring out the best way to work on my handgun skills while not getting to hit the range as much as normal. So yep, you guessed it, I really began to focus on dry firing. (Probably should have been doing this more anyway!) The difference now is that I’ve incorporated a laser training device and yet another one of those endless apps on my phone. I actually feel like this app is useful and will make me better though. I’m a cheapskate so I’m using the free app version recommended with the laser cartridge that I have. It is not bad and does everything I was looking to get out of it. (I’m using the G-sight 9mm laser cartridge and the G-sight app on iOS.) 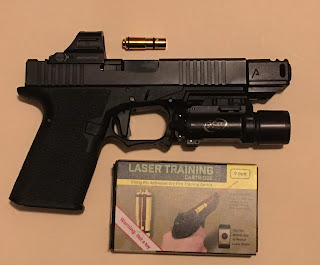 A great way to take dry firing to the next level.

I’ve mostly been focusing on using my SpaceNAG. I’ve really been working at getting better with a red dot through proper grip and draw stroke. It is amazing what happens when you incorporate a red dot when you’ve used irons for so long. I’m sure any of you who have used a red dot before, probably spent at least a little while ‘searching’ for the dot as you got used to it. This has allowed me to really work on my draw and presentation. Since doing this I very rarely have to search for the dot because I’m actually being consistent with my draw and presentation. Before, I would make minute adjustments as the irons came into focus and not even realize it. With a dot this isn’t possible. You have to have a consistent grip, draw, and presentation for everything to line up correctly. In turn, using a red dot as increased my proficiency with iron sights as well, because now I am minimizing any extra movement needed to bring my handgun into a proper firing position.
My accuracy while dry firing has already seen improvement as well as my speed to get the handgun into action. It definitely can’t hurt to spend time dry firing and it is fun finding ways to incorporate it during my daily routine. I’ve recently been doing some drills while working out. It has helped out in both realms due to me really having to focus on my breathing. I like to get my heart rate up then do the dry fire drills during what would normally be my rest period between sets. It has also helped break up some of the workout routine monotony.
Hopefully soon I’ll get to see how much will translate into live fire. If nothing else, it has helped me in my draw stroke and proper presentation. And it is enjoyable, which is worth a lot to help keep my sanity.
at April 14, 2020