"Don't let yourself get attached to anything you are not willing to walk out on in 30 seconds flat if you feel the heat around the corner." - Neil McCauley, as portrayed by Robert De Niro in "Heat"

And I'm not saying I've ever though about how I could knock over the bank with four of my closest friends, but well, legend has it that is use to be something taught in Ranger School until the Miami Shootout.

And well, when a seven year old sees a movie that has something a bit different than the M-1873s, Winchester lever guns, M-1 Garands, and M-16A1s he's used to, he takes a liking to both the film and the guns.

The Colt 733 has always been a cool gun. But I never wanted to pay $200 dollars to the Feds simply to removes two inches from an item that is already heavily taxed. And carry handles are so 1959.

But when you stick a kid of the '90s in a gun shop and give him too much disposable income, sometimes things happen. 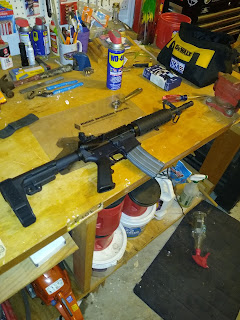 Not anything at all like a 733 except in general style. But man, is it handy. I'm kinda enamored with it.

I'm thinking it needs a detachable carry handle and one of the repro XM-177 moderators.

But until then, it's a gun I'll take with me if I have to leave in 30 seconds flat. 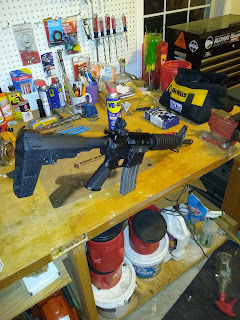