To begin this inaugural weapons Wednesday, I'm going to give you a brief rundown of my maternal grandfather, James, who I did refer to as Granddaddy. My paternal grandfather went by either Pop or Eli and favored Iver Johnson single shots and Ithaca 37 featherweights, but that is a post for another time.

Granddaddy was a farmer whom loved to bird hunt, primarily dove but sometimes quail and pheasant. He served honorably in the Georgia National Guard prior to WWII, was called up during the limited national emergency prior to WWII, fought in New Guinea, and was discharged to return home and tend the family farm. A successful farm producing corn and soybeans apparently being more important than a very under educated Captain of infantry at the time. Sometime in the late 1950s, he won a raffle held by the local mill and thus received a Remington 58, specifically the Sportsman with lots of tasteful engraving on the receiver and deluxe checkering. I've always found that funny because his other guns were all boring, utilitarian Sears and Roebuck or Western Auto specials.

The Sportsman 58 was Big Green's first foray into a gas operated shotgun. It was a very OK design. Had some issues, was finicky about cleanliness, and had a very basic gas regulation system that lended itself to user induced malfunctions occasionally. It was also labor intensive to make and kind of heavy. However, I've found that being a a heavy gas operated gun I can shoot it all day and not be worn out the next day.

In the early 60s, it was discontinued in favor of the 1100. It was one of the first non Browning designed American semi auto guns to have a big following. I bagged my first wood duck with mine, illegally shooting lead #4. Oops.

Granddaddy willed the gun to me when he passed. Dad broke it down, cleaned it, had it re blued, and re did the wood. It stayed in the corner of his bed room until I was nine at which point I started shooting hand thrown clays with it.

As I grew older, I got into turkey hunting and more serious about duck hunt, necessitating newer guns. I also took up trap and skeet and developed a taste for fine O/Us. That being said, some days, when the birds are flying low over that back pasture at home where Dad threw out some millet, it's nice to take the old gun, a box of ShurShot heavy dove loads, and beat through the grass looking for birds. I like to thank Granddaddy would enjoy that, too. 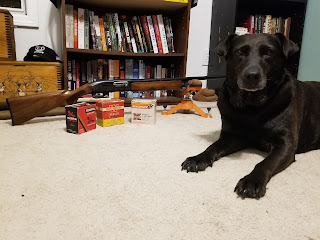