So, I've never been a big fan of the AR-15. That is to say outside of a SHTF carbine and maybe a coyote/hog rig, I never saw the point in having a safe full of them. That is not to say I think they have no place or anything; I was just not personally interested in having a bunch of them.

And then I snapped a lower on an upper. And decided maybe to do one more as a .300 BLK pistol because I think that's a neat round. And then thought I ought to be able to build one for my job. And then thought that maybe building one more just for the hell of it would be okay. And well, yeah. Here we are.


Yeah, I know poverty pony. This was more of a impulse buy than anything. Plus, it serves as a fun way to demonstrate how asinine our assorted firearms laws are. I had to do a 4473 for the above receiver. Brought said lower home for like $40 bucks. I figure that I'm gonna build a Mk 18 inspired pistol and SBR it one day. The aesthetics of the stubby barrel ending in a flash hider have always appealed to me.

That being said, I am gonna buy at least one more. That way, Jackie and I both will have a fighting carbine, a backup carbine, and an AR pistol. PACE and all that.

Oh, and as an aside the chicks at Hooters support the Troops on Tuesday. 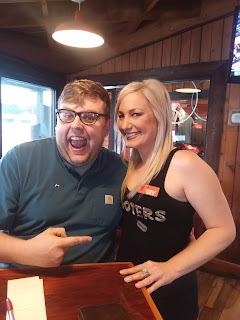 Reports from the front indicate that the continual reminder that the chicks at Hooters support them on Tuesday is good for morale. The DOD should conduct a study to see if increasing the support of Hooters chicks to other work days may increase moral.

Major renovations going on at work. So, look for the Monday and Tuesday posts to continue; but other posting/commenting maybe curtailed.
at February 19, 2019