By trade, scratch that, by preference I'm a shotgunner. Put me on a sporting clays course and I can hold my own against just about anybody as long as I'm shooting my Red Label or my 686 Beretta. In the Army, I did most of my fighting with a radio. So my M-4 or M-9 was more of an afterthought or tactical talisman.

But that being said, I like rifles. I really like rifles. I suppose to the American gun owner, shotguns are something we shoot for sport. Or hunt with. The pistol is the weapon of the criminal or the lawman.

But the rifle, that instrument of deadly precision is a truly American weapon, and the weapon of the common man. Miltia men armed with rifles stood toe to toe with King George's regulars. They weren't always successful but ventured out against a numerically superior force and managed to inflict some hurting on those red coated bastards.

Davy Crockett and Sam Houston squared off against a numerically superior force at a church down in Texas and did pretty well with their rifles. Alvin York found himself some cover and drew a bead on some of the Kaiser's finest with his G.I. rifle. Which for probably the first time in history, a shooter said his Army issue rifle was better than the gun he left at home.

So, the mystique of the American citizen armed with his rifle is deeply rooted in our culture.

I fancy myself an American sportsman in the tradition of Jack O'Connor or Elmer Keith. I love fine sporting arms. Especially fine sporting rifles, which is funny considering as previously mentioned, if one were to venture into my armory they would take note of all the fine fowling pieces and old DA/SA pistols before they got to my rifle assortment.

But I'm working hard to change that. I picked this up the other week from the old pawn shop I used to work at.


I had lusted after that gun when it was on the used rack at Gander.  And it's finally mine. And what's funny is that as much as I love the .30-06; I'd be hard pressed to emote a need for the three I have. Other than one will be converted into a .35 Whelen when I get around to it. One day.


So, that's all a very pleasant mental exercise. And I fine day dream concerning the sporting purpose of the rifle.

But, as Americans, we've always used the rifle as the great equalizer. Between good and evil. Citizen and tyrant. Man and beast. What have you. The other day a lady walked into the store with a long gun case and a Glock box. She was a single mom and lived alone. In a rougher part of town. The place the local LEOs respond to with two units and their heavy armor.

And in her soft gun case was a Ruger AR-556. A Tiffany blue Ruger AR-556. And she was fairly competent with guns thanks to her Daddy but wanted a refresher. And more than anything she wanted one of those "experts" behind the counter to tell her everything would be okay. 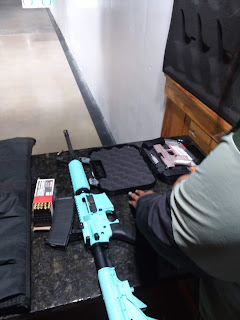 She certainly didn't need much in the way of instruction or safety. We talked some on carry ammo and 5.56 soft point ammo for use as a home defense round. We also talked about maintenance and lubrication. It was easy to cover technical topics with someone who wanted to learn. Fun even.

And it was remarkable for being unremarkable. I'm not much more than a dumbass redneck who is comfortable with any sort of small arms. She was a single mother living by herself in a rough neighborhood. We talked ammo, guns, and maintenance. She went about her way. I wiped down the bay that evening. Went home, watched the Hawks and had a beer.

The rifle is the great equalizer. And in America we are all equal.
at March 12, 2019