I called Mack and told him I was going to do another handgun comparison and he was very happy to know it was going to be a little different than some of the budget blasters I’ve compared before. (It’s also nice to not have to use Mack’s favorite piece of tupperware as the comparison piece!) Today are some quick musings between the Staccato XC and the Nighthawk TRS-Comp.

I was fortunate enough to pick up my own Staccato XC about a month ago. I decided to get one as a gift to myself and knowing that I would be using it to protect my family and teach others how to protect theirs, was all the justification I needed. I have been running this handgun exclusively for the past month so when I was recently given the chance to try out a Nighthawk TRS-Comp, I jumped at the chance to see if I chose correctly or poorly. (I do have to preface this with the fact that I was only able to shoot and handle the Nighthawk a little, but I do still believe I had enough time to give a decent comparison.)

The Staccato (new name for the old STI handguns) XC is somewhat of a cross between the duty line of current Staccatos and the legacy STI competition guns. I have been extremely impressed with mine. It has done everything I want of it so far. The Nighthawk TRS-Comp is their first, designed from the ground, double stack 1911 or 2011 offering. Before this Nighthawk has given the option of a double stack upgrade on their handguns but this is the first model they have offered only in double stack. Both guns have an integrated compensator into the barrel, they have full length dust covers with rail for lights, and have a standard 17 round capacity (they use the same magazines).

Working on my cellphone photography skills! 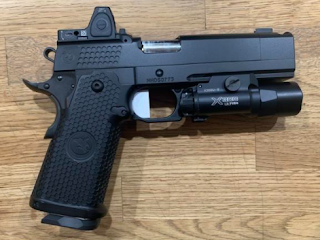 The setup I was lucky enough to test out.

What do all those differences really mean? The fit and finish on both are amazing, which should be expected of guns in this price bracket, with the slight edge going to the Nighthawk. The optic mounting system of Nighthawk is vastly superior to that of Staccato. It allows you to use standard height sights instead of suppressor height. It also allows the optic to sit lower in the slide making the transition to a red dot easier and the Nighthawk puts the rear sight in front of the optic which has many benefits. The lack of forward serrations on an optic equipped pistol can be gotten over but I prefer them, so Staccato gets the nudge in this part of functionality. Again, most of this is all personal preference so what about the most important aspect, shootability. I think the Staccato takes a large lead here. The slide seemed to run flatter and quicker on the Staccato along with less felt recoil. The felt recoil is in large part to the polymer grip on a steel frame. It helps absorb and dissipate recoil better than the aluminum grip of the Nighthawk. The slide runs extremely flat on both guns but the Staccato shows less muzzle flip which is crucial for getting rounds on target in quick succession. Now, this is very nitpicky because either handgun will outperform even the best shooters out there but we are comparing higher end handguns so it is a game of inches to find the best. I also would never scoff at the opportunity to get or even shoot the Nighthawk again because it was a solid piece of mechanical engineering.

Some of the other important comparisons to end with. The Staccato XC can be had for $4,300 right now, or for a little less if you are Military or LE and go through their Heroes Program. However, that will make it a 3-6 month wait. With the Nighthawk you are looking at least 11 months from time of order to in your hands and $4,600 standard setup and around $5,000 setup similarly to the XC with the option to mount an optic.

You cannot go wrong with either of these choices, but for now I am very pleased and extremely content with my choice to go with the Staccato XC.

My XC at work! (This thing shoots amazing)